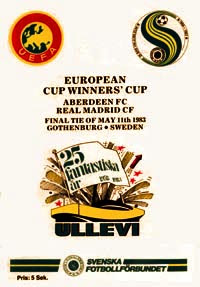 Aberdeen opened up 1982-83 with a visit from Ipswich for Drew Jarvie's testimonial, from which Miller was conspicuously absent. Eventually a new deal was thrashed out and he remained with the club, and the fact that Miller opted to stay at Pittodrie spoke volumes about the changing balance of power in Scottish football. The Dons were faced with a fixture headache almost at once, when they drew the short straw and had to play a preliminary Cup-Winners' Cup-tie against Sion of Switzerland in August. Having to play in Europe so early was hardly ideal, but the Dons surged out of the traps, hitting the luckless Swiss for seven at Pittodrie. The return in a picturesque Alpine setting was little more than a holiday for the Dons. 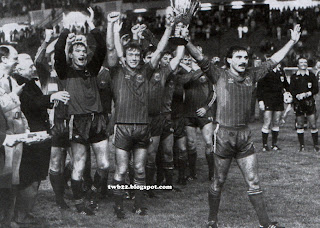 The early running in the League saw Aberdeen, Celtic and Dundee United establish themselves as potential champions, while in Europe the Dons had to negotiate a potential banana skin against Dinamo Tirana. A John Hewitt goal at Pittodrie meant a trip fraught with danger to Albania, but searing heat and crowd intimidation could not prevent the Dons putting up the shutters. Next up were Lech Poznan from Poland. A 2-0 win at Pittodrie seemed likely to be good enough, but Poland was in political turmoil in those days. The Aberdeen party's flight touched down in Poznan to be greeted by the sight of antiaircraft guns and a welcoming party wearing military fatigues. Doug Bell scored the only goal, although to this day Mark McGhee lays claim to it. The Dons had booked their passage to the quarter-finals, which in those days were held over to March of the following year. Aberdeen therefore had several months in which to drool over the prospect awaiting them. Ferguson had wanted a big name, and he got his wish. Names did not come bigger than Bayern Munich. 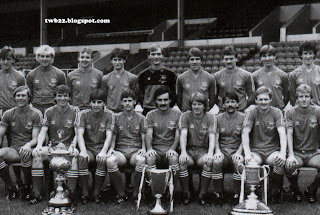 In the League, Aberdeen kept in touch at the top of the table with a crushing 5-1 defeat of rival pretenders Dundee United. Big Doug Rougvie was in irresistible form, scoring twice, to the delight of the Aberdeen support. Rougvie was another unlikely hero. He had been with the club since 1972 and had bided his time before becoming a first-team regular. His giant frame was a daunting sight for opponents, but Rougvie was no admirer of reputations and was ideally suited for the battles that came his way. Cult status beckoned. By the turn of the year it was clear that Ferguson would need to draw deeply from his squad. The Dons were gunning on three fronts and a dream treble was on. Only the League Cup was beyond them, Dundee United having dumped them from the quarter-finals. 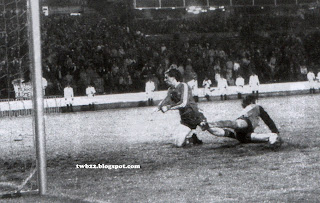 Whatever the team had learned from previous European campaigns was put to good use in Munich's Olympic Stadium, A travelling Red Army of around 1,000 made the trip and were rewarded with a display of true grit. The Germans had derided the Scottish challenge. Franz Beckenbauer was quoted in the Aberdeen Press & Journal before the tie: 'Aberdeen are technically inferior to Bielfeld, who Bayern beat 5-0. I expect Bayern to outplay them. As soon as the Scots set outside their country, they are only half as good as they are at home.' Yet it is hard to imagine a finer performance by a Scottish side on foreign soil. Solid in defence, Aberdeen surprised their hosts by displaying a tactical nous nurtured in the Ferguson way. A goalless draw set the stage for another famous European night, which was a common feature of Wednesday evenings during those halcyon days. Most supporters will claim this to be the biggest game ever staged at the venerable old stadium. For long spells the Dons looked out of it but they managed to hold on until a spectacular Pflugler strike put the visitors 2-1 ahead. Bearing in mind the away-goals rule, Aberdeen needed to score twice to win. Alex Ferguson rolled his last throw of the dice. On came John Hewitt. Within minutes the game was turned on its head. First Alex McLeish headed home a Strachan free-kick. How opportune that the McMaster-Strachan 'messed up' free-kick routine finally paid a handsome dividend. A minute later Hewitt squeezed a volley through the legs of Muller after the keeper had kept out Eric Black's header. Bedlam. The closing minutes were like hours. It was a time for big hearts, and it required stout work from Willie Miller &. Co to see the Dons through. A team of Scottish upstarts that could play a bit had humbled Bayern Munich. It appears that only Uli Hoeness, the Bayern manager, had heeded the warning signals. Observing the Dons beforehand he had warned that they would provide a formidable obstacle, but his opinions were lost in a sea of German arrogance. When all was said and done, Aberdeen woke up to the fact that they were in the semi-finals of the European Cup-Winners' Cup. 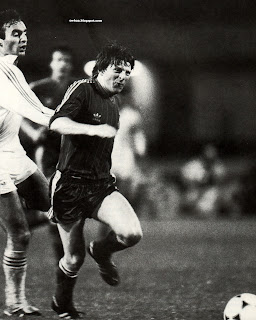 Also through were Real Madrid, Waterschei from Belgium, and former adversaries Austria Vienna. Ferguson did not hide the fact that he relished a crack at the little-known Belgians, with Madrid as his dream final. The Austrians were experienced and would be a tough prospect, but Waterschei on the other hand were beatable. The Dons' boss got his wish, with the first leg at Pittodrie. The excitement generated around the city was extraordinary. Never before had the Dons been so much in the limelight. Ferguson remained outwardly unmoved, but he knew his team would have to do the business at home. Waterschei were the other shock team that year. They were based in the town of Genk and were unfashionable in every sense. Aberdeen assistant boss Archie Knox took in the Dons' opponents and was convinced that, if Aberdeen could get at their defence early, they could be unsettled. Ferguson had often deployed the mercurial Doug Bell in key European games. Now he was given a starting berth and his inclusion was vital. Two early goals had Pittodrie in raptures. The Dons were in command, cutting through their opponents almost at will. There was no let up, and by the end Aberdeen had crushed the Waterschei challenge 5-1. Such a margin in a European semi-final exceeded all expectations, but the Aberdeen machine had been in full flow. The return two weeks later was little more than academic. Ferguson took the opportunity to draw deep from his squad, in the wake of a bruising Scottish Cup semi-final against Celtic. That Hampden clash presented a battle that the Dons could have done without, but the physical nature of the contest was hardly unexpected. A Peter Weir header was enough to carry the Dons to their first final of the season. Three days later they reached their second. Waterschei salvaged some respect with a 1-0 win on the night, but Aberdeen's achievement was marred by the loss of Stuart Kennedy, whose injury meant he would never play again. Their place in two finals confirmed, the Dons had six games left in which to clinch the League championship. But points had been squandered in March and April, and Dundee United seized their chance. Not for the first time, Aberdeen had opened the door for the Tannadice club. However, the Dons had more important matters on the horizon. 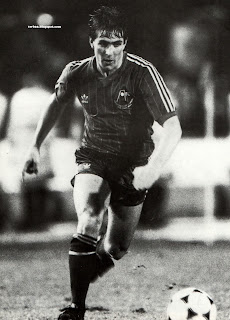 It was a relaxed Aberdeen squad that prepared for their biggest ever game. A shadow side defeated Kilmarnock 5-0 in a League fixture brought forward by two days to allow the team more time in which to prepare. Alex Ferguson was in surprisingly jovial mood as the team took their first training session on the Ullevi pitch in Gothenburg. More than 15,000 of the Red Army were undertaking the trip by air, land, and sea, leaving the city of Aberdeen severely under-populated. Awaiting Aberdeen were Real Madrid, coached by the legendary Alfredo Di Stefano. The Spanish giants had cost a mint to assemble, whereas the total cost of Fergie's Furies was just over £400,000. Surely this was a mis-match, but conditions favoured the Dons when torrential and persistent rain doused the pitch on match-day. From the outset the Dons were positive, and early pressure almost brought reward. Gordon Strachan crossed from the right and Eric Black's athletic volley crashed against the bar. Aberdeen continued to press and a text-book corner brought them the first goal. It was Strachan whose deep kick found Alex McLeish on the edge of the box. His downward header allowed Eric Black to clip the ball past Augustin in the Madrid goal. The Spanish side had not expected the Scots to come at them so early and it was fifteen minutes before they mustered their first attack. But it brought an equaliser. McLeish's pass-back slowed in the wet and gave Santillana the opportunity to tumble over Jim Leighton. Juanito scored from the penalty awarded. Real seemed content to hold the Dons and it was not until the second half that Aberdeen regained their earlier initiative. The heavy conditions had been energy sapping but wave upon wave of Aberdeen attacks might have been better rewarded. Gordon Strachan's volley was saved by the keeper's legs. Then Augustin kept out Black's header. Neale Cooper came close with a searing drive. It appeared that Real were content to take the tie into extra-time and, if necessary, penalties. John Hewitt had replaced Black late in normal time. Twelve minutes into the extra 30, Peter Weir fed Mark McGhee down the left. McGhee's perfect cross was missed by the Real keeper and dropped for John Hewitt to head home. The expected riposte from Real only materialised in the dying minutes. A twice-taken free-kick from Salguero whizzed past the post and it was all over. Amid scenes of unbridled joy the Dons had done it. In the cold light of day Aberdeen had achieved what only Celtic and Rangers in Scotland had done before them. For a provincial team it was all the more remarkable. The Dons returned to the city the following day to the now traditional open-top bus ride down Union Street. The only stragglers were the 500-strong Aberdeen supporters still on board the St Clair ferry, which had been hired for the purpose. The 'boat people' were not to arrive home until the day after... 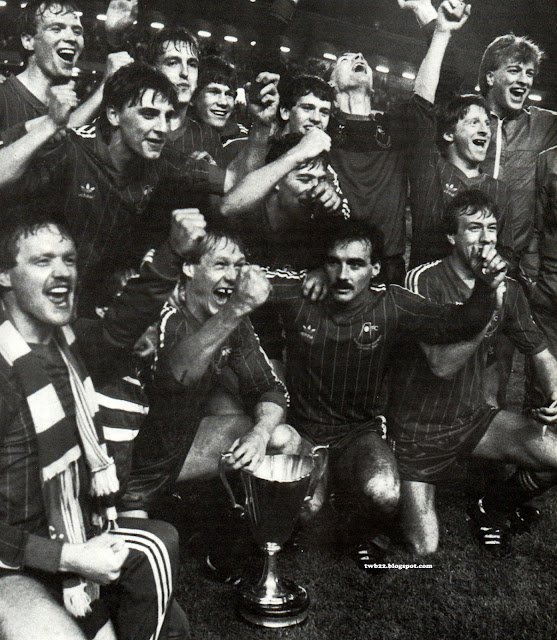 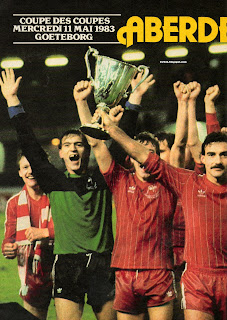 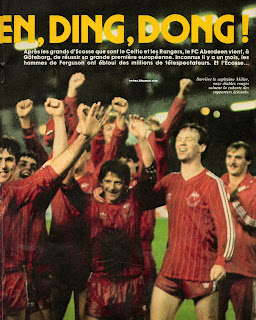 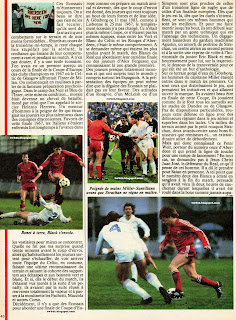 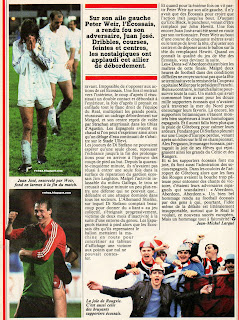 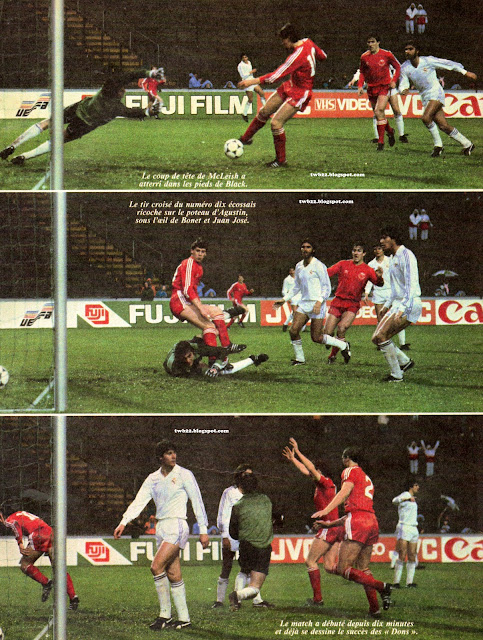 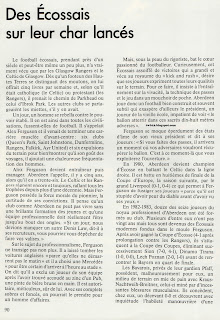 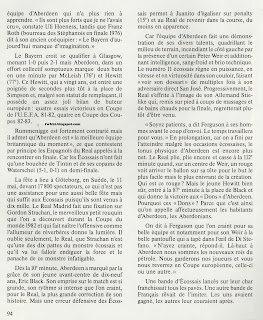 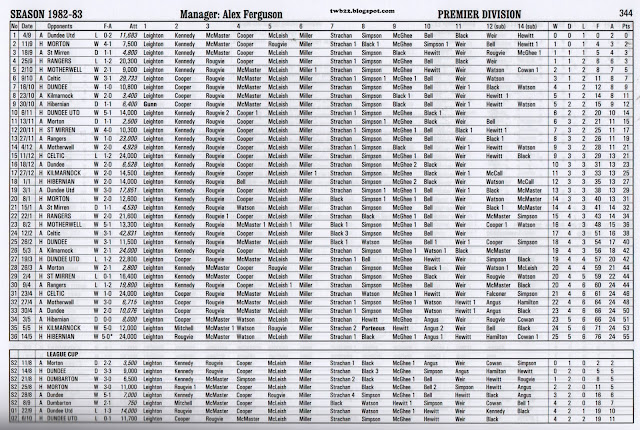 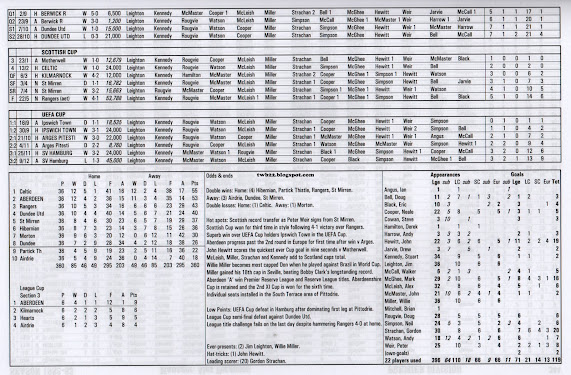 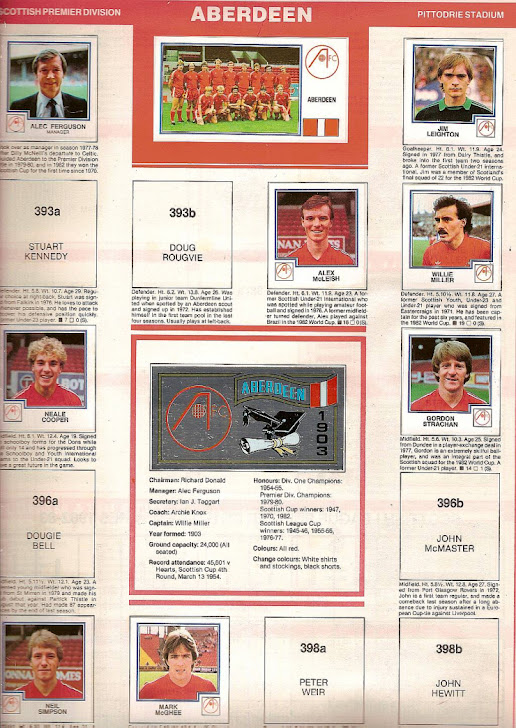 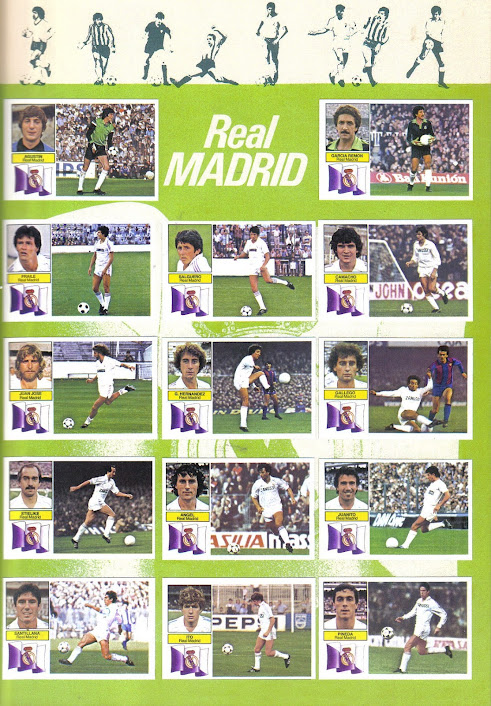 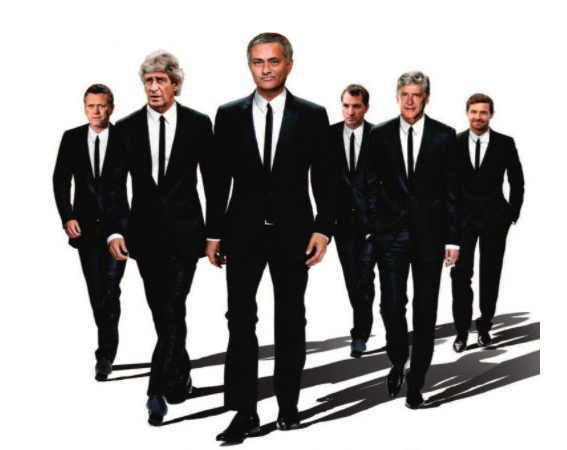 Tell me in the comments about dead links. It happens after some months 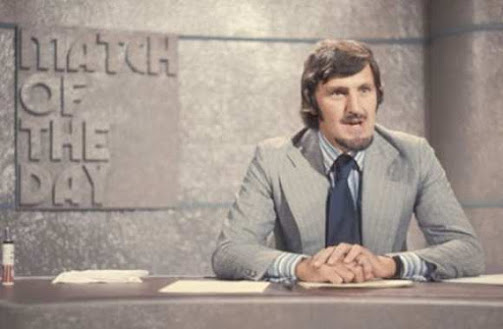 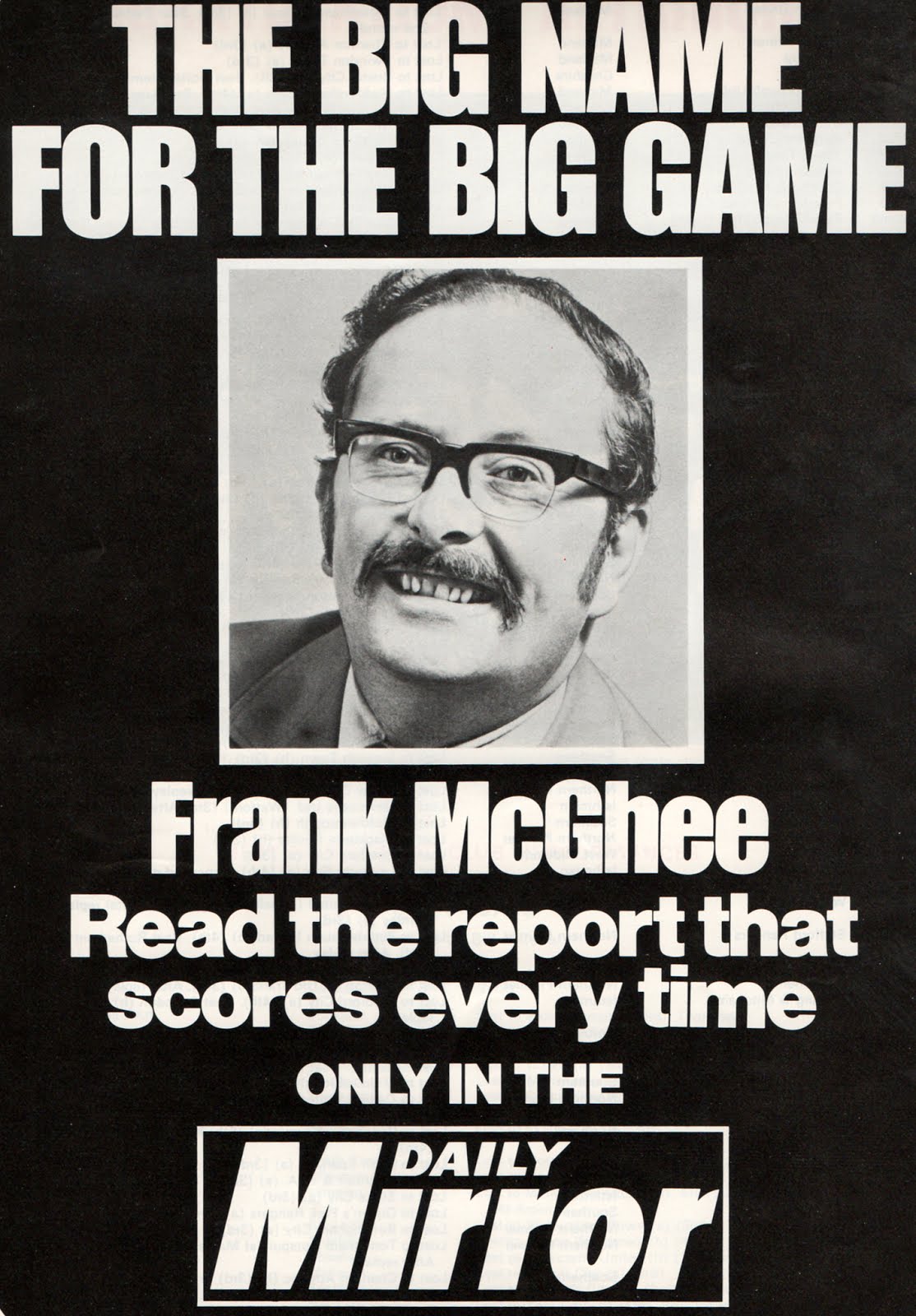 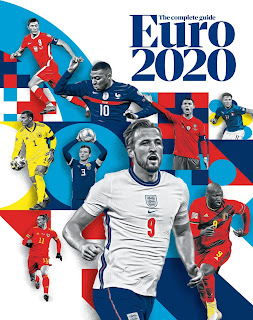